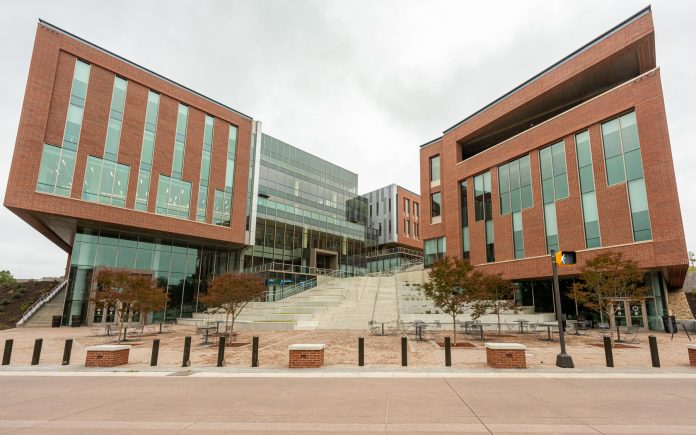 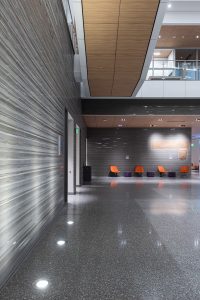 Clemson University is known for its high-ranked football team, the Tigers. In addition to its 25 conference titles, the team has made five playoff appearances and holds three national titles. Clemson University’s academic program is often overshadowed by its strong athletic program, but academically, Clemson consistently ranks among the top 20 universities in America.

Designed by LMN Architects, the Wilbur O. and Ann Powers College of Business building itself is already architecturally significant. A modern red-brick-and-glass echo of the traditional red-brick buildings found elsewhere on campus, the College of Business building sits atop the highest point on campus and points the way to the future based on the solid traditions of the past. But when the construction job for the building started, that future was mired in the past — three years in the past, to be exact. 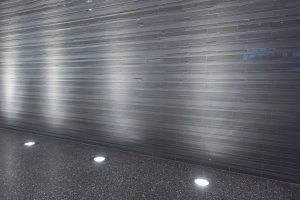 “The build was behind because of problems caused by the weather from three years before when they tried to get the concrete poured,” explained MAPEI sales representative Brian Levering, who assisted with the project.

Solutions for covering concrete, as well as setting LVT and carpet, were needed right away. The general contractor on the project, DPR Construction, and the flooring contractor, Harris Carpet and Floors, reached out to MAPEI for those solutions.

MAPEI on the job 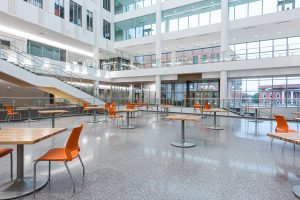 Levering describes arriving to the jobsite with the clock counting down — even before the job began. “When it was the flooring contractor’s time to be onsite, the job needed their help to push everyone else to get finished and get out of those areas,” he said. And, those areas covered a lot of territory.

The building specification called for 11,447 square yards (9 571 m2) of carpet tile and 12,460 linear feet (3 798 m) of rubber base to be installed throughout the building’s hallways and offices. 9,054 square feet (841 m2) of LVT would be installed in hallways on two different floors in the five-story building. Then, 16,434 square feet (1 527 m2) of tile would be set in various locations throughout the building. “The project called for a variety of MAPEI products,” Levering explained. 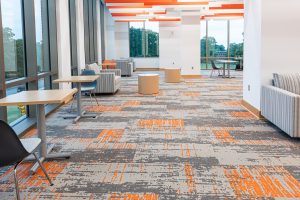 Executing plays worthy of the Clemson Tigers, multiple crews of four to five workers from Harris set out on each of the building’s five floors to tackle the project. “The crews worked simultaneously,” Levering said. “They had to because we were behind before we even started.” 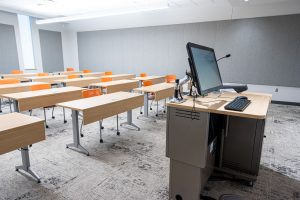 The crews that were setting tiles had perhaps the most variety of substrates to deal with throughout the building. Levering described how, working throughout the building, “the crews applied mosaic tile on wall areas on every floor, in the ground floor café – kitchen and bathrooms – and on floor and wall areas in bathrooms on every floor.” Crew members used Ultraflex LHT tile mortar for the wall and floor tiles; depending upon the location, they used Ultracolor Plus FA or MAPEI Flexcolor CQ as the grout.

The schedule became even more compact when the job, which began in January 2020, was impacted by COVID-19 in March. “The completion date was set in stone for the end of May 2020. And then the pandemic hit,” Levering said when describing the tense scene. 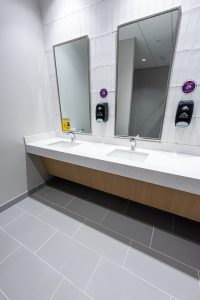 Fortunately, a well-trained crew and excellent products provided a needed winning run. Because the construction industry was deemed “essential” in America, it did not shut down during the pandemic; this meant that jobsites could continue to operate if they observed CDC-approved safety precautions. So, the Harris crew members added CDC-approved safety gear on top of their regular personal protective equipment (PPE) and had to pause for temperature checks throughout the day. “We also maintained social distancing,” Levering said.

By the end of May 2020, the last trowel was used and the last tile – be it carpet or mosaic – was in place. The Wilbur O. and Ann Powers College of Business is open for business and ready to climb in the rankings, thanks to a touchdown play by the crews from Harris Carpets and Floors and MAPEI. 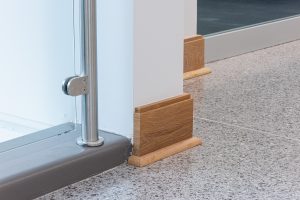 Contractor Issues: How to Prepare for a Legal Action

How to Take Care of Your Onsite Tools