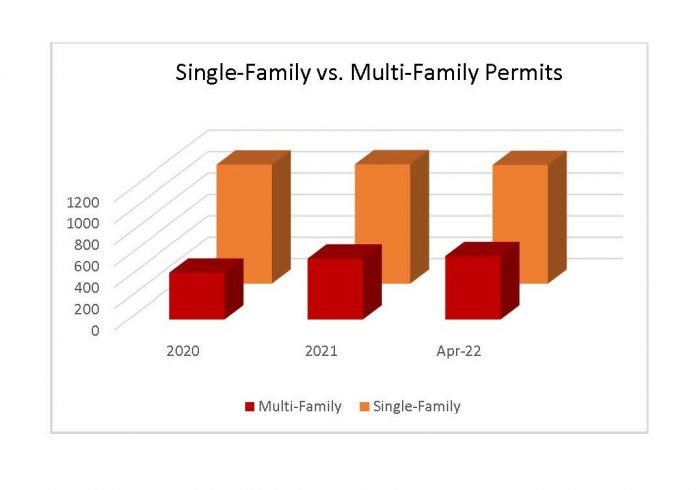 It has been quite a turbulent six months since our last article in January/February 2022. Developments affecting cost and supply chains such as the Russian invasion of Ukraine, expanded inflation to its current 8.6%, while the recent 60-day shutdown of Shanghai and rising interest rates require closer examination on how it is impacting the housing market in the U.S. over the next 18-24 months.

Residential Housing Construction
Single-family housing completions ended at an annual rate of 1,242 units in 2021—a 4% increase compared to 2020. Total construction spending in residential housing has risen to $819 billion, an increase of 34%. We can clearly see construction inflation ran up 13.2% in 2021, as tracked by the Saint Louis Federal Reserve. Since the end of 2021 through the end of April 2022, total residential construction rose to $891 billion on an annualized basis, and factoring in the rise to 8.6% inflation, things remained flat. Residential building permits have started to cool off and have grown only at 5% while housing completions have only increased by 4%, indicating a slowdown is near. We will closely monitor permits and completions going forward.

We continue to experience a severe shortage of housing due to the shortfall of construction since 2008. The entire growth of residential housing has come through multifamily construction, which grew to 592,000 units (annualized April 2022) up from a total of 437,000 units in 2020—an increase of 36% over the last 18 months. Due to rising interest rates, high running inflation (both construction and general) and persistent inventory shortages which keep pushing prices up, some prospective home buyers have been forced to rent instead of own. 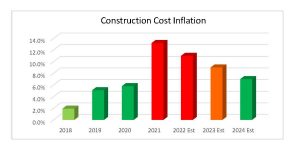 Public Construction
Public construction (after adjusting for inflation) has started to decline even more rapidly, and it is yet to be seen when the infrastructure bill which was passed last year will have a positive impact. It will eventually increase substantially, adding $550 billion over the next 4-5 years. 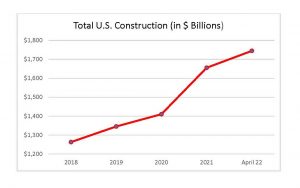 Comparing the actual numbers one may come to an overly pessimistic conclusion; however total construction spending grew from $1.345 billion in 2019 to $1.745 billion in April 2022. After factoring in inflation, expenditures have grown substantially to where we are today compared to a normal economic year in 2019. The baseline remains very strong, as there is still a lot of pent-up demand from the pandemic-induced slowdown and there are still many projects to complete in all three construction sectors.

Inflation, Geopolitical & Supply Chain Issues, Recessionary Concerns
The Federal Reserve has acknowledged that the current high levels of inflation at 8.6% need to be reckoned with. They will continue to raise interest rates until inflation starts to come back down to 4%, which will create pressure for both the overall economy and the construction market. The Federal Reserve started to shrink the balance by $8.5 trillion in June, which was accumulated during the pandemic. This will help push inflation back down and will most likely result in some credit tightening in the broader economy.

Russia’s invasion of Ukraine, which challenges the world order created by Western victors after WWII, will have long-lasting implications for at least a generation. Sanctions aimed at Russia have created a significant rerouting of many natural resources—namely crude oil, natural gas, copper, aluminum, iron ore, etc.—and will take years to find an equilibrium where prices can come down.

Even as the pandemic is approaching its end and things seem to normalize, inflation will eventually come back down to 2-4% levels. Unfortunately, these events will not change the current high material cost environment. As an example, construction lumber prices have come down significantly from their highs, but they are still up 70% compared to 2019. Steel likewise is still 60% higher than compared to 2019. Most other construction materials have seen recent highs, including products and services that are derived from or tied to crude oil.

The climate policies of Western governments likewise will continue to keep prices elevated as breaking dependency from fossil fuels will be much harder to achieve than most policymakers think, and oil producers will be reluctant to increase output. At the same time, exponential demand for renewable energy products such as rare earth metals, lithium, copper (electric wiring) etc., is being created which in turn will continue to drive prices up, making “green” energy and related products a lot more costly in the foreseeable future.

Shanghai and its surrounding cities went into a partial and then full lockdown for almost eight weeks at the end of March 2022, which started to affect supply chains again negatively. Closed factories, scarce shipping capacity and diverting through other ports have created even longer transit times and bottlenecks both abroad and domestic, which will take several months to normalize.

With interest rates rising and more aggressive policies put in place by the Federal Reserve to combat historic high inflation, there is a valid concern that the U.S. might end up in a mild recession. The Congressional Budget Office (CBO) recently estimated that by the end of 2022 the U.S. economy will have grown by 3.1%. We expect interest rates to rise through Q1 2023, and the economy will most likely show a soft landing with inflation closer to 4%. We estimate a slowing economy in the second half of 2023, while the Federal Reserve starts to consider moderate interest decreases. However, we do not think these decreases will happen until Q1 2024; quite possibly even later in the year. 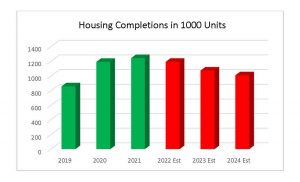 2022-2023 Outlook
As the U.S. economy is facing all these headwinds, we do believe very strongly in its resilience. The country has proven repeatedly that we will weather the storm and adapt quickly to anything that comes our way. That being said, the housing market is short nearly 4 million homes due to the lackluster building activity for 10 years following the housing recession of 2008 and residential builders are becoming more cautious about their 2023 outlook. We estimate a decline of 10-15% for new construction for single family homes over the next 18-24 months, as a larger group of homebuyers has been priced out of the market due to higher purchase costs and higher interest rates.

Home buyers will eventually get used to paying higher interest rates (still historically low) and we fully expect the existing home sales market to remain robust. In the short run, there is still so much pent-up demand that many projects will continue to be completed. Since people must live somewhere, multifamily projects will continue to grow significantly during the same period. Renovations (remodels) will see a significant uptick as homeowners will stay in their existing homes and invest some of their accruing savings to update them. Even though foreclosures have started to tick up, they have a long way to go before they reach pre-pandemic levels. Credit quality requirements have remained high for homebuyers, allowing only purchases with proven cash flow plus adequate reserves. Wage growth in 2021 has almost entirely offset inflation, and we expect over time that salaries will catch up accordingly to offset the current high inflation.

Commercial construction markets still have so much pent-up demand (at least 9-12 months) that they will continue to see very robust activity. The public sector is still anticipating strong growth as the $550 billion infrastructure bill will eventually contribute significantly.

Editor’s Note: No portion of this article shall be used without the written consent of Tego Systems Corp. and ProInstaller magazine.