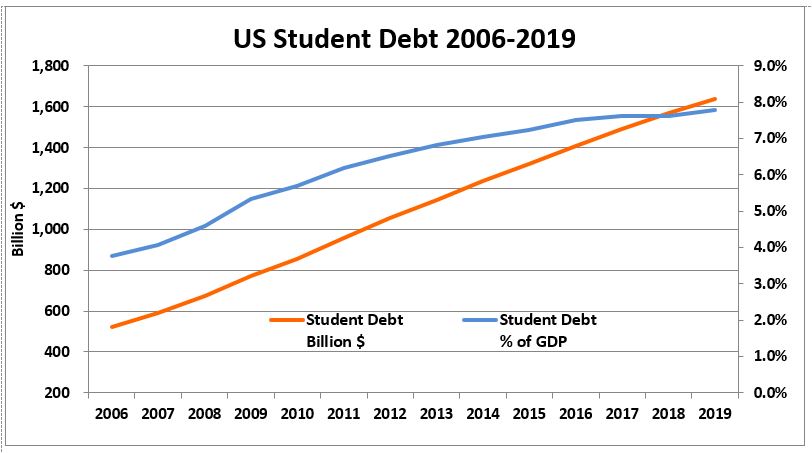 Editor’s Note: Only final revised data published by U.S. government agencies and other data sources have been used in analyzing the U.S. economy to maintain accuracy and discipline in our deliberations. We utilize monthly data from the following U.S. government agencies: Federal Reserve Bank, the U.S. Census Bureau, the CIA World Fact Book – all of which is then cross-referenced with data from the World Bank, the International Monetary Fund (IMF), the Harvard Joint Center for Housing Studies and several other economic institutions with a solid long-term track record. We use inflation-adjusted numbers, calculated based on the official inflation data published by the U.S. Federal Reserve Bank and the U.S. Census Bureau.

Since our last report appearing in the September/October 2019 issue of ProInstaller magazine, many of our views based on our analysis have materialized and the downward pressure has continued in the overall U.S. residential and commercial construction markets. Revised numbers by the U.S. Census Bureau were available for September 2019 at the time of writing this report in early December 2019. Along with final data published by the U.S. Census Bureau in the current October 2019 memorandum.

We are on track for a 12% decline from 2018 in single-family housing completions at an annual rate of 858,000 units. Residential construction inflation is now revised at 4% increases with the decline in reality to 16%. Interestingly, residential building permits inched up 5% over last year (2018) which gave the recent builder confidence news a boost which we feel is misguided as single-family housing completions are still trending down considerably over 2018.

Recently, there have been more optimistic views going into 2020 for the residential home market from several industry experts and players, but we do not think that tighter inventories of single family homes will spark a housing boom despite the fact that credit standards are expected to loosen in 2020.

The multi-family segment has seen higher completions at an annual rate of 354,000 units — an increase of 31% over 2018. At the same time, we see multi-family building permits cooling off as issuance is down 4% compared to last year. However, builders are still filing higher numbers of multi-family permits (476,000), which is 27% higher than units completed, as the trend from owning to renting continues, and builders are focusing on multi-family developments.

Public construction is up by 9% over last year at $327.2 Billion; after factoring in 5% construction inflation, the whole sector is still up by 4%.

According to reputable institutions, the global economy remains weak, particularly the manufacturing sector, to levels not seen since the 2008 financial crisis. Global growth is now expected to be at about 3.5% for 2020 — derived mostly from the service sectors. The main driver for the anticipated growth rate in manufacturing are the rising trade and geopolitical tensions which have significantly increased uncertainty about the future of the global trading system and international cooperation in general.

Monetary easing policies in the world’s developed economies have cushioned some of the impact and the continued spectacular rise of service sectors, have kept unemployment rates low. As the U.S. is upon its next election cycle in 2020, these events are quite contentious and may be more so in modern times negatively affecting economic sentiment. With some international trade agreements partially completed and some changing on a weekly and sometimes daily basis we have an overall sentiment of uncertainty. In the last five months, enough fundamentals have not changed in favor for construction markets to signal improvement and get back to normalized growth until at least past the 2020 elections.

Generational Changes Affecting Residential Housing: There are several interesting facts about the demographics of the various generations in the U.S. that are either retired, established in the workforce or are entering the workforce. Zillow has recently published a study conducted in all U.S. residential markets which shows Baby Boomers own more than 30% of all residential real estate, and possess 57% of the nation’s wealth, while representing only 22% of the population. The Boomers wealth is tied to their paid off primary real estate and retirement accounts.

Zillow is estimating that between the early 2020’s and the late 2030’s approximately 1 million residential properties per year will hit the existing home resale market. If this occurs, 20% more homes will be added to the future supply from the current 5 million + today. The question is, how many of these homes will eventually be absorbed by Generation X, the Millennials and Generation Z? Of course, some of this excess inventory will be naturally absorbed, but we believe that these dynamics will maintain considerable downward pressure on resale prices for a 15-17 year period.

Homeownership age compared to the 1990’s, when first home buyer median age was in the low 30’s, has changed upward dramatically to 47 years today. From the Boomers to Generation X and the Millennials, the average family size has declined from 3.3 to 2.5 people per household, which obviously requires fewer square feet. Generation X who are in their 40’s+ today are already owning smaller real estate than their parents, and the general consensus of the Millennials is not wanting to own a home, because they have gotten shell shocked living through the housing collapse of 2008-2011 and witnessing the financial struggles of their parents. Further, most prefer to live in urban areas where home prices are at historical highs, making renting smaller square feet condos/apartments the only affordable option. 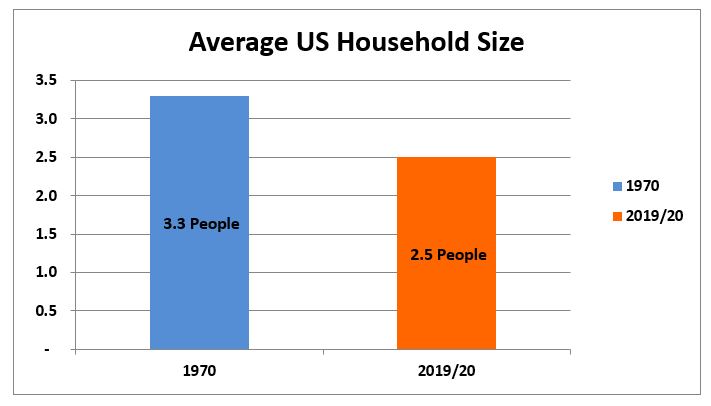 Generation X and the Millennials are not accumulating wealth at the same rate or proportion as the Boomers did due to various factors like the amortization of considerable student debt, which has ballooned from $521 Billion in 2006 (3.8% of U.S. GDP) to $1.6 Trillion (7.8% of GDP in 2019), changes in societal values comparing previous generations to today’s, where living in the moment has taken a more predominant focus, compared to the long-term planning of the Boomer generation who were nearly obsessed with retirement planning.

Early studies suggest the pendulum will swing back for Generation Z, as they will see the negative effects of their parents, who will not have the retirement resources, as the Boomers did. Based on our research, analysis and resulting conclusions, we remain with a very strong opinion and conviction, that after adjusted for inflation U.S. constructions markets will produce flat to slight growth results over the next several years.

As the U.S. economy remains reasonably strong, mention needs to be made of which sectors are keeping it going. When studying the history of economic growth in the developed world, a country’s prosperity rises its economy starts to shift and rely more on service sectors, healthcare and pharmaceuticals, rather than the more traditional industries that have fueled the previous rise. These will maintain or regress and technology advancements contribute considerably to that shift, as well.

The U.S. economy has been no exception to this development and health care, service sectors and pharmaceuticals have become the main drivers of U.S. economic growth and employment, while agriculture and manufacturing are not faring the same. Besides the stable economy, economists and financial advisers are increasingly more concerned that we are either in or will enter a recessionary cycle over the next two years. Most people view a recession as a terrible glooming event, but reality is, that even if a possible recessionary cycle is upon us, the U.S. economy will still grow, just at a lower rate.

In our last report, we discussed the effects of the “thinning out” of the U.S. middle class as a long-term trend. Because of the Feds intervention and its counterparts overseas, QE (Quantitative Easing) monetary policy, and due to the amount of debt outstanding and interest to be repaid, the developed world is pretty much stuck in a low interest environment (some developed countries like Japan or even Switzerland have currently negative interest rates on savings accounts).

The Federal Reserve has been moderately raising interest rates since the last downturn in 2008-2011 and has been forced to relinquish some of the increases, despite a strong economy. This low interest environment, which is here to stay, has a quite devastating effect on the ever-widening wealth gap in our society and the entire developed world.

Ray Dalio from Bridge Water Associates (hedge fund) has been quite vocal on how modern capitalism is broken, only benefiting the wealthiest. After the last recession, we have seen an acceleration of wealth amongst the richest unlike ever before in history, and the underlying dynamics will repeat themselves during and after the next recessionary cycle. As interest rates are lowered or remain low and money supply is increased via QE through issuance of bills and bonds. These proceeds are being lent by the Fed at the Fed Fund rate to banks, who will lend it at interest to credit worthy borrowers, who in turn use it to fuel their growth.

As credit worthy individuals and organizations can borrow even more and since there is no significant interest to be gained from traditional more secure financial instruments, qualified borrowers have no choice but to look for alternatives. The excess cash is then invested in asset classes that will protect against inflation such as well-run companies whether privately held, publicly traded and prime commercial real estate. That inevitably continues to drive valuations of these asset classes up as they are the only investments that will protect against inflation and generate positive cash flow. These asset classes get more cash and in turn will make their franchises and profitability grow.

On the other side of the spectrum, the less credit worthy will be left behind, and the wealth gap continues to widen. These unintended consequences will further lead to more extreme populism in politics no matter the flavor. The sheer size and velocity of the U.S. economy is not rivaled in the world and we have by far the best legal framework of any nation today to maintain a healthy economy that will continue to grow for a very long time to come. The construction markets will continue to grow, but with these short and long-term challenges it most-likely will not be as robust for those who have business exposure to U.S. construction and will remain sideways with very moderate growth for the foreseeable future (2-5 years) after factoring in construction inflation costs.

Former Federal Reserve chairman (1979-1987) Paul Volcker passed away on December 8, 2019 at the age of 92.Thanks to his character, incredible financial acumen and best interest at heart for our country, he implemented financial measures that normalized the extremely high inflation environment of the late 70’s and early 80’s. Following his term, he was entrusted in 1987 by the world’s financial leadership and involved governments, to make a review of the Holocaust funds hidden in secret Swiss Bank accounts, which eventually led to a more than a billion dollar settlement with the surviving heirs of the Holocaust.

Editor’s Note: A follow-up report will be published in 2020. No portion of this article shall be used without the written consent of Tego Systems Corp. and ProInstaller magazine.